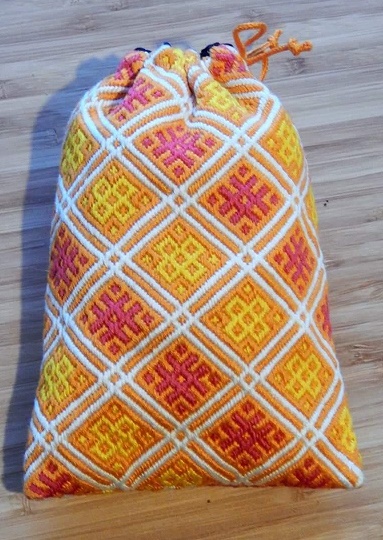 When I started doing the brickstitch embroidery, I didn’t know that I would make a bag out of it. I just wanted to try brickstitch and after I had done a small bit decided to keep going to have enough for a bag.

The pattern I used is from an extant sample in the V&A and charted by Richard Wymarc. You can find an image of the original document at the Victoria and Albert Museum.

I used materials that I had at hand. Some evenweave fabric with much smaller count than the original piece which is 37 and cotton embroidery thread. I started with MCM thread but ran out and replaced with similar colours from the Anchor brand.

I used the full thread, all 6 plies, as the thread count was so small and I wanted to make sure that the fabric was covered.

When I was starting to do the embroidery, I tried to different ways to stitch.

The original has four squares on each side ornamented with a pelican in her piety pecking its breast, interlaced blossom devices, a curved rendering of the gammadion and the letter ‘M’ worked in gold thread, couched. But I didn’t do those as I didn’t have detailed patterns for that and it was my first attempt of brick stitch. The original was lined with red plain-woven silk, but I used dark blue fabric that I had at hand. The drawstring of the original is a fingerloop braided string. I didn’t have the opportunity yet to practice this technique, so I made a lucet draw string. I left off the tassels as I will not use this as a bag hung from a belt.

I formed the embroidered rectangle into bag by folding in in half and sewed the bottom and the side together.

I liked doing the counted embroidery (much more than free embroidery which requires shading) and in my next project I am going to attempt a much closer reproduction of a brick stitch purse.

I put this bag in the A&S Protector competition at Raglan Fair 2017 and was lucky enough to win. Afterwards a lovely visiting SCA lady (I think from Lochac) gave me some more tips, e.g. to use skeins used for weaving instead of normal embroidery thread as it comes in larger batches.